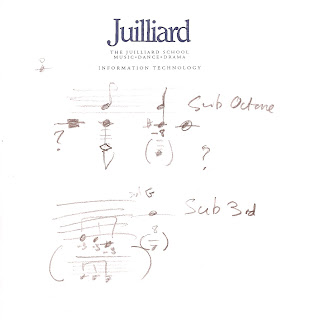 AGAIN! The last entry is October last year, since then we have a New Era, the Obama Era. I watched the Inauguration with colleagues and students at Juilliard's concert hall projecting live CNN (after all Itzhak Perlman, a faculty performed). 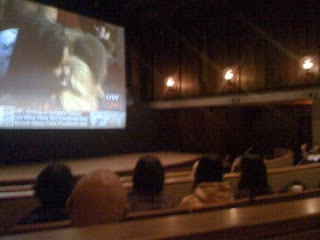 Everyone stood up for national anthem, adding multiple chords. It was a joyous but solemn event and I saw some students crying. I have pitch-tracked Obama's various speeches for fun and interest. His oratory is very pitch and time based--very musical, I find :) The best one musically so far is still that 2004 DNC keynote speech, the "Audacity of Hope" speech. Anyway I am very happy for my two American children.

As for my work, I haven't been really hibernating although it feels like it in this snowy NYC this winter, which kids are enjoying so much. When it snows, my daughter will go out at 7:20AM waiting for the school bus in front of our building, making smily faces on all the cars parked in front. I stay inside the lobby in front of a radiator enough to watch her. I guess I used to be a little girl who loved snow and cold too!!! What happened to that?! :) My husband does better in the cold, well he is 1/4 Swiss after all! He even made an Igloo in Central Park which turned heads.

On January 15, 16 I did a performance of the first version of my collaborative work Lucid Possessions by media artist Toni Dove, at a performance space in the Village called HERE.org. 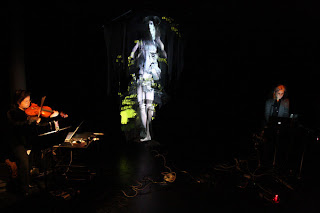 I was using the Augmented Violin system, interacting with the video and robots made by LEMUR's Leif Krinkle and Luke Dubois who programmed Toni's software. Their complete command and professionalism are the shining examples in the Max-world (the software I use) and I learned so so so much just hanging around with them! Anyway, this has been a huge project for me, the very first time I have ever done anything to do with spoken text. Also there were a lot of parameters--violin, text, video, robot, motion sensor etc etc. I am usually just using violin and computer, so I took some time trying to focus on what I really want to do than what I can do. Another topic for another day...

This is a very busy semester for me. In less than two weeks I'm going out to California for the first time in a very long time. I know I should do more traveling to the west coast... I'm playing at UC Irvine and Stanford Univ. Then in March I am playing the Music From Japan festival in NYC, DC and on tour, which music I'm finishing right now--I'm playing several pieces as well as my own. So there are a lot on my plate. I also registered my kids to After School programs, so my son is taking cooking, computer, science and gym (all his own choice except gym). At 5 yrs old he is still clingy, and sometimes I have to leave him in the morning in his classroom crying for mommy. His grief is so real (to me, the mommy, at least) he looks nothing less than a lead character in a Wagnerian opera or a Greek tragedy.

The picture at the top is a scribble my husband and I just made yesterday; the Music Editor from the STRINGS magazine and I are trying to work out a notation system for Subharmonics. It is rather complicated as I have various Subharmonic intervals (octave, 3rd, 2nd all applying slightly different pressure of the bow) and I have double stops where I play normally on D string while playing Subharmonics (of different kinds) on the G string. How to accurately notate this is really a pain and I haven't spent any serious effort since it was only me who has been playing it! Now that my laziness has caught up to me and it's time for explaining to the world.... Graham (editor) is so very patient with me and guiding me through all this. My husband made some suggestions, and being a mathematician, computational geometry specialist who has the credit of being the principal violist at Princeton Orchestra at one time, he is always right. How can you argue with a mathematician?
Posted by Unknown at 8:26 PM No comments: