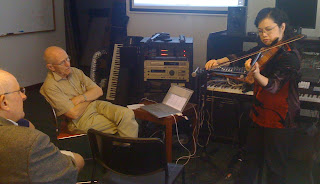 This is Max Mathews, a pioneer of computer music, who visited Juilliard last week to take some of my Subharmonic samples in front of a class (of a colleague, Mike Czajkowski in the photo). I am going out to California in February so probably drop by at CCRMA at Stanford where he is a prof. Emeritus, and visit his lab for a further study... Max is in great shape mentally and physically. I truly respect his unrelenting pursuit and the power and willingness to go as far as you can at any age. My own father is 75 also and now thinking of building a new solar house in Japan. I really hope I'm going to be like this when I'm 80, scratching my violin away! :) The sad news is that Prof. Bill Bennett, mentioned in the last entry, had past away this summer in June without finishing his music acoustics book... I miss him very much.

Since the last entry, my son went into an emergency room cutting just below the eyebrow getting 13 stitches (he fell inside a city bus), my husband had a deviated septum operation (and didn't get a plastic surgery as Hollywood actresses do), I went and came back from performing in a very nice international festival held in Oaxaca, Mexico called Instrumenta (and brought back an excellent bottle of Mezcal for my husband--without worms inside--they said "that's for tourists"), then baked a cake for my son's 5th birthday the day after I came home.

At the moment I'm trying very hard to finish mastering a new album with my subharmonic works, coming out from Lovely Music. It is going very slow with all the distractions coming my way one after the other. Now with my son in a wonderful Kindergarten (where people buy real-estate to be zoned for) I have chunk of free time in the morning for the first time in like 7 years. What a change---maybe I will start to get some work done!?
Posted by Unknown at 8:11 PM No comments: OK, this is not good! It has been too long. Too busy, too much stuff going on. I see my last post was October (!). In late October my son had a perforated appendicitis, and the episode included my first ambulance ride, spending Halloween in a hospital, followed by not-so-easy recovery at home. My 4 year old son was a trouper, who called his very small incision "WOOF" because he didn't know the word 'wound'. It completely stopped my life most of November.

At the moment I am working on mastering my new solo album; I had finished Vitessimo, my first work for bowing sensor Augmented Violin, developed at IRCAM. The picture above is my version, called the Augmented Violin Glove, fitted with lace glove so I am completely wireless. Visit www.marikimura.com/Vitessimo.html for details. In the course of it, I have been rethinking about bowing a lot, and the relationship between functional movements (bowing) and expressive movements (such as conductor's arm). Is expressive movement really necessary for the audience to 'see'? to understand music? My answer is a 'conditional' NO. Would audience need to SEE the expressive arm movement to 'understand' music? Then how do you explain Karl Böhm's miniscule batton movements generating gigantic sound out of Berlin Philharmonic? Got to go, but not finishing the thought... To be continued...
Posted by Unknown at 12:29 PM 2 comments: