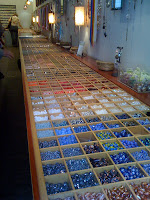 Some family and friends lamented that my blogging has not been updated :) I now have less than 3 weeks left in Paris...

I haven't really bragged about the Paris weather, knowing many of my friends and family in New York and Japan are having a horrifically hot one... Paris is average of 18-20C (around low 60F) and very, very beautiful this August. Besides I spend most of time indoors without a window in air-conditioned studio, so I decided to do a day of tourism for change.

I went on wondering about in my neighborhood the Marais. It is a posh area, with many fashionable stores that I would probably have nothing I can afford :) Here is a beautiful store of beads; like any women (sorry if I'm mistaken) I have entertained the idea of making my own jewelry and failed, or at least I am never confident enough in wearing my own creations in public! But I do proudly wear ones my kids make for me :) This store could revive my imaginary hobby again. 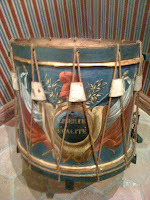 As my brother-in-law Frédéric suggested, I went to Paris Musée Carnavalet, the city museum of Paris. He said that it has a very good description of the French Revolution from the point of view of Parisians, and it was true. I could not help but to stop and be grateful to the people of this country for the "liberté, egalité, fratanité", seeing many panels of the "Rights of Men", and feel the amount of blood that was shed. When you walk on the streets of Paris, you feel it. There was a drum which played the rhythm "liberté, egalité", the hand-made ladder that was used to break through the infamous Bastille prison. The real objects that were touched by people, the evidence of people's kinetic memory can transport you to that time, more than any description of the revolution. 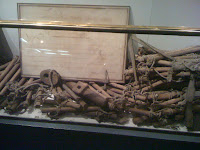 I am now composing and preparing for my upcoming appearances, incorporating the tools that we have developed together. Some are still 'under construction' but as I remind my collaborators, I am the one on stage and things have to work :) It is simply not acceptable that a program works 'most of the time'. It has to work 150% of the time to be on stage. I take robustness and crudeness of the program over an elegant program that looks good but crashes sometime! Or an old version that works over a new version that is unstable. Those of you in Paris, you are welcome to attend my 'exit' presentation on Thursday, September 2nd at 12:00 at Salle Stravinsky at IRCAM. Please let me know as I need to make a guest list. 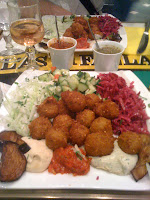 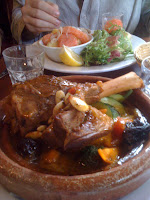 My host at IRCAM Norbert Schnell and I have been having some late dinners; in general people eat late here. Or maybe even in NYC we eat earlier than 'grown ups' without small kids! This is the famous L'As du Fallafel where there usually is a huge line during the day. I was told it is the "world best" including the middle east. I could eat here everyday. I also had a very nice Tajine near Belleville, again with Norbert after we fixed some of my bugs even on a Sunday.

I'm preparing for my life after IRCAM, now using all my own equipment to make sure things run on my own. After my presentation at IRCAM on September 2nd, I will go to Radio France in the same afternoon and record an interview, planning to perform with my own system. It'd better work. :) The broadcast will be on September 5th while I am going to be sitting in the airplane back to JFK. 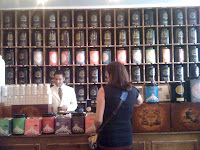 ps. This is a tea store called Mariage Frères, one of my favorite stores. I don't know if my husband remembers, but when we just started dating he asked what he could bring from Paris. I said, "Please go to MARIAGE Frères, and get me a kind called EROS". Poor man, he really didn't stand a chance :)
Posted by Unknown at 5:41 AM No comments: 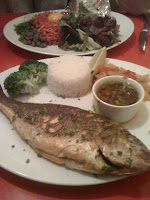 (Wednesday) I'm cold. It's 11:20 PM and freezing cold here in the basement studio of IRCAM. I'm wearing two long sleeve sweaters, wool scarf and thin comforter on my lap! It is so quiet and I must be one of the only people here. July was calm but August is so quiet the BEST time to be here at IRCAM, I was told. I hear June and September are the worst with everyone coming back in force and festivals in June.

(Friday) I have been completely immersed in work, barely coming up for air. Because of the intensity, and need to stay inside this ice-cold Studio 1 at IRCAM, I brought in electric water boiler for my Oolong tea, blanket, leg warmer, sweater and scarf. It's very comfortable. My children are with grandparents visiting Brive la Gaillard (south of Limoge, north of Toulouse), a fois gras country where my sister-in-law lives. I would have gone with them but I really need to make a dent in what I'm trying to do... 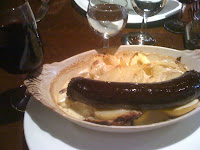 I do occasionally dine out, when friends come to visit or someone at IRCAM asks me out. I went out with my dear Florence, the administrator of IRCAM who takes a great care of me. She took me to a restaurant near Les Halles, and I had the most fabulous "Dorade". Again I was silent in eating this. Then my old Juilliard classmate, turned out we also both went to Boston University, Chris Culpo came to visit and he took me to his favorite hound near Rue Rambuteau called Le Feteu. The owner Jerry said "Oh it was the birthday of Pierre Boulez yesterday!" How nice that a restaurant owner would proclaim the birthday of a composer. Paris is a big city but somehow it still retains that old small village quality. I had the most, most..... delicious Boudin (blood sausage) here, and learning I'm a visitor at IRCAM he said I'm welcome back anytime, and I certainly will. After all they had my favorite Confit de Canard, and judging from how Boudin tasted like... 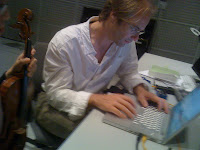 My work now is very intense because I am now in the creative phase using all the hard work my team has been creating with me. The new ideas between us keep on growing in the form of, "Oh by the way, how if we do..." and off we go for another Holy Grail hunting. It is truly a rewarding experience. Here is my main host this summer Norbert Schnell who is one of the most elegant scientist/programmer cleaning up my mess grimacing :) and fixing my "DIY" (do it yourself) bulldozing programs.

(Saturday) For once I wasn't at IRCAM last night after midnight and had a decent sleep. I vowed myself to visit a museum today, Hôtel Carnavalet, Museum of the city of Paris which is in the Marais. Then I must go eat that famous Falafel. There is always a huge line I get discouraged...
Posted by Unknown at 5:22 PM No comments: