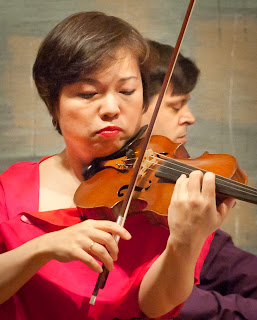 So I played a duo concert "Hue for Two" with Stephen Gosling last Saturday, to a standing-room-only audience thanks to the extraordinary work of my publicist Jonathan Slaff; he got the New York Times weekend listing which also received 'starred' recommendation, so I actually had some audiences who were tourists from out of town just came out of curiosity.  I appreciated very much playing not just among my usual NYC circle of "contemporary music crowd". (photo by Lee Wexler)

I also for the first time, tried my hand in fund-raising through United States Artists.   It was a very educational experience, but in the hindsight, it was very very hard to both do the fund-raising AND performing such a demanding program.   I'm not sure what I should do in the future regarding this issue. 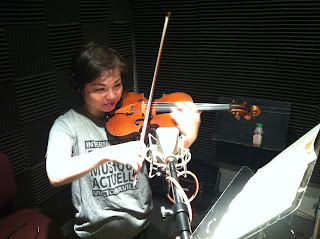 Today I went into a studio at Harvestworks, a media arts center in NYC, to record one of my newest pieces called "JanMaricana for Subharmonics" which uses my newest Subharmonic 5th.  It was composed for my solo concert in May, presented by the Vilcek Foundation which support immigrant scientists and artists; I was so enormously grateful for their complete support that I decided to write and dedicate a work for Jan and Marica Vilcek borrowing their name, and even put in some Smetana/Dvorak-ish Czech harmonies in the piece (they are of Czech origin).    By incorporated Subharmonic 5th into this JanMaricana for the very first time, I thought the work will be known as the very first composition in the history of the violin that uses the Subharmonic 5th, also my deep gratitude to Jan and Marica Vilcek for recognizing the significance of my work. 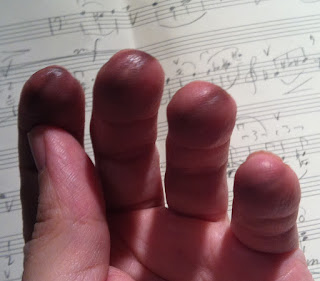 I have this pathetically fatalistic notion that every time before I get onto a plane, I make sure to leave my latest everything current LOL!   I thought that I should document this recording of JanMaricana before I fly to Japan in a few weeks, and while I still can play this very difficult piece. :) Here is my finger after 2 hours of recording; I also took the sound samples for my other new work, "Voyage Apollonian" which was also premiered at the Vilcek concert last month; I will have to process it and post-produce it, but now I have the sound source.  I also recorded the samples for English composer Andrew Lovett, whom I'm collaborating.  The whole session took less than 2+1/2 hrs, of which more than 30 minutes were spent on adjusting the microphone placements. My wonderful sound engineer is Paul Geluso, who has been recording most of my albums as I trust his ears.  We listen and listen until we like the violin sounds, in every register.  It really is a great pleasure working with him as he understands what I like. 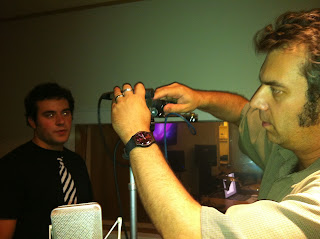 Here is Paul adjusting the microphones in XY placement; he also put a third microphone below aiming from a different direction.   We spent a long time adjusting the balance of the two tracks.
Posted by Unknown at 10:25 PM No comments:

In Copenhagen and temporary home of my blog :)

Well, I just logged into the blogger.com using Danish version of Google, and managed it :)  I'm here on a multi-media collaborative workshop project by NYC media artist Toni Dove.

I have been on hiatus yet again from my blog, but at the moment I have temporarily immigrated my blog to United States Artists, a NPO I was invited to join; it is an artists' advocacy for fund raising organization, connecting artists directly to the audience and philanthropists.  Next week, I'm self-producing a recital of violin and piano, with prime NYC pianist Stephen Gosling entitled "Hue for Two".  For the first time, raising my own funding.

Please visit my page at Hue for Two.  You can see my demo video there, as well as daily (I'm trying :) updates (click on "updates" below our picture/video).  Today I just posted a note about Debussy's violin sonata and a 1-cent clue on violin practicing :):)

If you like my temporary blog, I appreciate any pledge (you won't be charged unless I reach my goal) and now your every $ has a matching fund from USArtists!

The picture above is a copy of the first page of Debussy's sonata, which belonged to my last teacher at Juilliard, Joseph Fuchs.
Posted by Unknown at 8:58 PM No comments: