I was in Beijing from October 23-31.  Finally now I'm little more relaxed, I get to post some pictures and stories from there.   My October was really hectic for me; As I wrote in my previous post, I had two premieres within a week: Eigenspace, my new interactive graphic collaboration, I-Quadrifoglio, my first string quartet premiere with the Cassatt String Quartet.  Then I prepared a new composition written for me by French composer Marc Battier for violin and electronics entitled Double Suns, to be premiered at the Musicacoustica Festival held at Beijing Central Conservatory of Music.  I had to learn Marc's piece within a week, since it was just finished :) which suited me as I had absolutely no time before the I-Quadrifoglio premiere!

On October 22, I left for Beijing from Newark, a 9-day trip leaving my two children with my husband.  The day I was leaving, my daughter who is physically very fit and hardly ever sick, decided to come down with high fever.  She usually goes down very deep like this, but comes out of in within a day, which fortunately she did according to my husband and she didn't miss any school.  Nonetheless, it was a little unnerving to leave them in this state...  The flight to Beijing was full, with the longest line for the first class and business class that I have ever seen.  It looked almost as long as the economy line which I was in.  The flight plan showed that we were flying straight up from New York through Canada, over the north pole, and down through Siberia to China.  It was the first time I've done that.

As we were landing I took some pictures from the plane: a lot of blue and red roofs of factories (I assume) but these two colors symbolize China.  Here I come!   Then I was picked up along with a group from Lyon, GRAME.  Here are composer/architect Pierre Jaffrennou, formidable percussionist living in Lyon Yi-Ping Yang, and composer Max Bruckert also from Lyon, waiting for the car at the airport.  Not just because of these people from Lyon, but with others from France and Chinese professors who are Francophone, I think I spoke more French than English in China throughout my stay.

From the airport, as we approached central Beijing, you are struck with avenues after avenues with gigantic new architecture. Just imagine twice the size of New York's Time Warner building, and that is standing next to each other on both sides for miles and miles, by streets twice the size of Park Avenue. That's Beijing!

After hurriedly checked into the hotel, I was brought straight to the rehearsal to meet Marc Battier at the Beijing Central Conservatory.  The new piece he wrote for me, Double Suns, was to be premiered the next evening at the Opening Concert of the Musicaoucstica Festival.  The Opening Concert was entitled Voyage Apollonian, adopting my composition for interactive graphics I was performing in the concert (graphics by Ken Perlin, NYU).    The next morning I staggered downstairs of my 3-star business hotel restaurant for breakfast: my first Chinese food buffet, which I ate too much and lasted for two-meals worth :)
Posted by Unknown at 9:12 PM No comments:

Long hiatus since July.  I just had a very busy fall season, constantly feeling like a hamster in a wheel :)  Now I am finally having to sleep normally, regrouping, think and listen again, without constant crises and pressure one after another.  It is a VERY welcome and much needed state of mind :)

I realize my last post was July, when I came back from Japan.   The editor of STRINGS magazine, Greg Olwell, read my previous post about my visit to Japan, especially concerning teaching and meeting with Japanese students in the aftermath of the Fukushima nuclear disaster, and asked me to contribute to the STRINGS magazine blog, which they called "Music as Medicine". 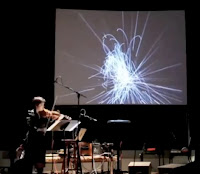 In the fall, I had two big new works premieres.   One is a commission from Harvestworks, an interactive audio video work with Japanese movie director and media artist, Tomoyuki Kato.  I met him through his brother, Prof. Kazuhiko Kato, a renown computer science professor at Tsukuba University in Japan.  He came to my lecture in July there, and over the internet, he introduced me to his brother.  Mr. Tomoyuki Kato is widely known for his stunning visuals and designs expos, industrial presentations, and theme parks.  My new work is called Eigenspace, using work that I did this summer with Nicolas Rasamimanana at IRCAM, using "eigenvalue" of the bowing movements.  It is related to kind of inertia of the movements my bowing and musical expression generate.  It is a new mode of interaction for me, which I am now exploring intensively. Mr. Kato also uploaded his "director's cut" version on YouTube; it shows a bit of rehearsal images of the project. Eigenspace was premiered at Roulette in Brooklyn, and we are planning on expanding it to an evening-long event in the future. 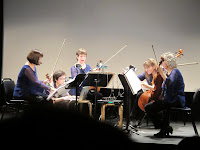 Another big project for me this fall was a commission from the Cassatt String Quartet (through the generous support of the Fromm Foundation Award), "I-Quadrifoglio" for string quartet and interactive computer.  The picture here is the Cassatt Quartet rehearsing "I-Quadrifoglio".  I so wished that I had chronicled my compositional process and progress.  This is my first composition in recent years, which I was not involved as a performer myself; I had to notate my musical intentions very clearly, which I have become complacent with, since I have been writing for myself most of the time.  For the four string players of Cassatt, I was conceited that I, a violinist myself, know what I wrote and what I mean.  It was only when I was confronted with all kinds of musical questions regarding articulations and expressions (for example "what do you mean by an accent with a dot, is this stronger or shorter than the... " etc) I realized how much I didn't know.  This was a going-back-to-school experience for me, which I am very grateful to have the most patient and generous teachers as the Cassatt Quartet!  The premiere was at the Symphony Space, and there was a pre-concert cocktail/interview along with other composers on the program, venerable Judith Shatin and Sebastian Currier, both master composers.  Although I felt a little intimidated :)  I very much enjoyed that it was the very first time I could actually enjoy a glass of wine just before my performance, since I'm NOT playing! In this picture I'm setting their computer up just before the performance.  It is a totally hands-free, no click-track or foot-pedal used, interactive composition, which fortunately didn't fail at the performance!  I'm so humbled that this is my first string quartet ever, and I was fortunate enough to be given this opportunity.

A week after the "I-Quadrifoglio" premiere, I left for Beijing, China for the first time, to participate in Musicacoustica Festival, invited by French composer and organizer of TIMI Modern Music Ensemble's director, Benoit Granier.  I returned on October 31st, followed by family obligations and some grant proposal deadlines.  Now that I have a bit of breathing time, I am planning a "Beijing mega-post" and photos in the coming few days :)  Or so I promise!
Posted by Unknown at 6:24 PM No comments: