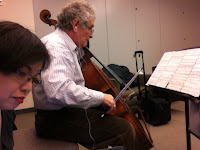 So I just spent a good few days completely focusing on developing a "plug-and-play" interactive system for cellist Joel Krosnick, and made Ralph Shapey's cello piece "Solo, Duo, Trio" interactive using MaxMSP.  In terms of programming it was relatively easy, but the hard part for me was to imagine all the practicing scenarios that one would expect, if this was a human 3-cello piece.  "OK, lets play from m. 47", "can you do that again?" "just 1st and 3rd cellos only, let's go from where we stopped" etc. etc.    This is Joel and I rehearsing today at Juilliard. It is truly inspiring to work with such a remarkable musician who has worked with and recorded Carter, Shapey etc. intimately with their presence.  Joel discussed multi-rhythm schemes by these composers and the performance practice of these works.  I felt like I just attended a private lesson!

When you are rehearsing with human players, of course all you have to do is to "say" where and how you are going to rehearse, but for interactive performance with a computer, especially when there is no computer operator, and for a classical cellist who has never used any kind of computer music program before, AND who is holding a cello on one hand so essentially he has one hand or just a finger or two to press a key, it became surprisingly challenging.  I had to simplify the user interface, making it automatic enough but still keep flexible and versatile rehearsal schemes.  I also spent a good amount of time color coding cues and displays for at-a-glance recognition of what is happening, since Joel is mainly reading the music and have very little time to glance at the computer.  Having to plan for my another commission I'm writing for the Cassatt Quartet, this was a very good exercise for me.  I'm happy to say Joel is able to do everything on his own :)  So far so good!

Joel has been performing this piece by playing back the recording of his overdubbing, which is obviously cast in stone in terms of timing.  He said that he used click-track to make that recording.  He also mentioned that, at one performance he performed some notes a little too long, but of course when it was "played back" during the overdubbed part, it was different from what he just played.  So this time, he is performing it live, which Shapey originally intended.  Now that he has to live with "himself" so to speak, which isn't cast in stone but played live, Joel said "Now I have to get used to playing with ME!" and we laughed.

Joel and I discussed how people still use click-track in performance, which both of us don't like.  We agree that the sound of click-track itself dictates musical quality, and the price of "in sync exactly on time" kills the spontaneity of rhythm and live performance.   I have heard very young and talented composers even, while attempting to use the most sophisticated "score following" program and failing (or the system wasn't working as well), resorting to performers wearing click-track.  What is really a point of writing music that requires a click track and syncing with electronics so perfectly that requires an electronic conductor to dictate the humans?   That's sad.  But that's just me  :)

I have heard one exceptional performance by a young duo from Mexico, whose name I'm trying to remember--if someone knows them please remind me!  The second word of the group was "Ritmica"... I heard them at Anthology Film Archives concert years ago.  (I will update this entry with their name when I find it!)   Anyway the two percussionists were perfectly in sync, very musical and vibrant.  And they were using click track wearing headphones.  The music was very rhythmic and the use of obvious click track, for the first and only time for me to this day, didn't bother me; it made sense.  I went up to them after the concert and asked, "so what ARE you listening?"  They let me hear their headphones, and to my surprise, it wasn't the usual "ticking" with one pitch--which I find appallingly unmusical--but they were actually listening to some piano sounds in ARPEGGIO which was actually changing in 3, 4, 5, 7 or something in time!  What a creative and musical idea :)

BTW Joel is wearing a headphone but NOT listening to a click track :)  We also talked about how disturbing it is to wear a headphone and play an instrument at a concert.  We also agreed that we both prefer these "ear buds" to full-ear-covering headphones, since you really can't hear your acoustic sound well with those unless you uncover one ear or something.
Posted by Unknown at 9:11 PM