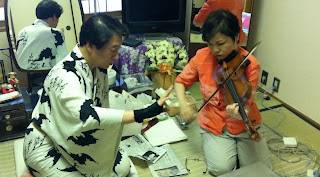 I have been visiting Japan almost for the week, giving lectures and performances here in Tokyo.  I decided to do this, leaving behind my family in NYC, after hearing that young Japanese artists and students are feeling rather depressed and helpless in the aftermath of the nuclear disaster in Fukushima.  I wanted to at least give some hope and joy of being creative in a unique way, and by all accounts, from the letters I received from enthusiastic students at my lectures saying "so encouraging, so much fun, astonishing, flabbergasted" (!)   I am so happy that I came back. 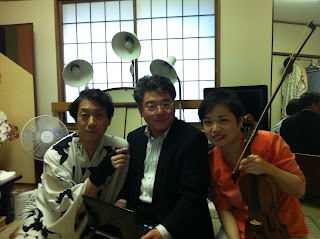 A few years ago, I had an earth-shattering, shocking experience seeing the extraordinary performance by one of the foremost Kabuki actors of our time, Fukusuke Nakamura, (Japanese here) who gave an avant-garde performance dancing with a pianist playing Chopin  (see  "Where am I from?").  Yesterday, I had one of the most inspiring meeting with this extraordinary artist.  I visited him in the backstage of Shinbashi Performance Theater (新橋演舞場), in between his Kabuki performances.  I was introduced to him by Today's top Shamisen virtuoso Mojibe Tokiwazu 5th, the head of the House of Tokiwazu（常磐津文字兵衛５世）whom I collaborated a few years ago when I curated Music from Japan Festival in New York. Mojibe is the most astonishing artist; no one can be more traditional, yet he does completely outrageously adventurous activities.  (see his Shamisen Rock video!) I can't say how much I respect his open-mindedness; we worked together on interactive computer with Shamisen and Violin.
Fukusuke, a Japanese celebrity, a theater actor as well as a movie star, is one of the foremost Japanese Kabuki actor in the female role (Onna-kata 女形) recognized over the world.  I was quite star-struck at first, but I immediately realized he is a true artist completely free of pretension, who is tremendously open-minded and genuinely interested in all forms of creativity.  He was wonderful to speak with, about all issues regarding the very essence to performance.  We are in very different fields, but I think we connected instantly at the artistic level.  We spoke about the 'flow' of performance, 'preparations' gestures, what is the 'quality' of movement, and how one must remain connected to the tradition, as well as being experimental.  I wished that I recorded everything he talked about; Fukusuke comes from a long line of the prestigious House of Nakamura, the family who has been Kabuki actors since the 1700s.  He spoke about many of his legendary relatives and how they worked, their discipline and what he learned from them; many of his relatives were given the titles of Living National Treasures by the Japanese government.
The picture is Fukusuke wearing one of the motion sensors I'm working with, developed at IRCAM in Paris.   I took Fukusuke's hand gesture data, and let him try out some interactive computer music with his hand.   I was very happy that he seemed genuinely interested in collaborating together, and he wrote so in his official blog (in Japanese) , and more pictures here too !!!
Posted by Unknown at 1:18 PM

Hi, I'm Carolina, I was visiting IRCAM some days ago. You showed me a video of a performance of you and Fukusuke, a brazilian music. Do you remember. I tried to find it on youtube and I couldn't. I'd be really happy to see it again and to share with some friends.

Thank you so much, see you around,
Carolina