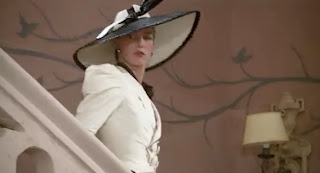 This post is not related anywhere near Subharmonics, but I think I have an addictive personality.  From childhood my mother used to complain that I would get into one thing and ONLY one thing, like food, book, toy etc. going through phases.   I still haven't recovered from this 'sickness' which continues to my adulthood.  Maybe because of this obsessive personality, I get to do such esoteric thing like Subharmonics LOL!

To take an example, I watch same movies over and over and over again, actually ONE SCENE of a movie over and over again.  There is this movie called "Evil Under the Sun", an all-star cast Agatha Christie movie starring Peter Ustinov.  In this 1982 movie, English/French actress Jane Birkin has a scene towards the end where she dramatically changes her demeanor and especially clothing, making a spectacular entrance.  I am so obsessed with this scene, with the accompanying march-like music, I believe by Cole Porter arranged by John Lanchbery.  Peter Ustinov tapping his hand and his feet with the tune, and the tempo slows down in crescendo changing into more jazzy music, and Jane Birkin's character descends the spiral staircase while everyone watches her open-mouthed in awe. (if you have netflix, it's about 1hr 48 min)

I think what I'm obsessed with is the TEMPO change.  It's the effect of this music and the scene that are so perfect together.  I'm not giving away the plot since this is a mystery, but for some reason, I can watch this scene, over and over again :)   I'm curious, what are other people's silver-screen obsessions?
Posted by Unknown at 12:40 AM