I got much reactions from my previous post, "What it means to be a Japanese expat today".  In the conclusion of the post, I mentioned that John Cage, in his rare talkative mood, came to talk to a small group of us students at Juilliard.   He predicted, "Money, Borders [between countries] and Politics will disappear" from the world.  I just heard this rather Utopic prediction this week again, from none other than my own father. 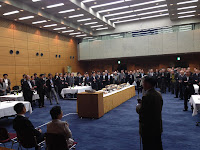 On Friday, I played at the 80th birthday celebration of my father, Ken-Ichi Kimura.  The gathering was held at the Architectural Institute of Japan 日本建築会館, attended by 170+ former students, former colleagues, long-time associates both personal and professional, who occupy the top tiers of Japanese architectural engineering, design, construction industry and academia.  My father is one of Japan's foremost pioneers in solar energy, and a Prof. Emeritus in Architecture at Waseda University, or the "MIT of Japan".   He also had a long history of association with TEPCO (Tokyo Electronic and Power Company), who is responsible for the Fukushima nuclear incident.  TEPCO and my father both promoted alternative energy to gas and oil in Japan.  He designed one of the first experimental solar houses in Japan, where I grew up.  During the oil crises of the 1970s, he became well-known, and as a child I remember TV cameras descending upon our home shooting a footage of my mother washing dishes with hot water that was heated by the sun.  At this very moment I'm sitting in this solar house, inside its 'half-basement', typing my last post from Japan as I'm leaving to NYC tomorrow. [my father pointed out that I said I am 'going back' to NYC :)]

During the 3+ hr event at the Architectural Institute of Japan, my father gave two speeches, both 1+ hr long.   The first talk was about his childhood and how his family's lives were turned up-side-down in the aftermath of WWII, returning from former Manchuria, which the Imperial Japan occupied.   I didn't know that 220,000+ Japanese citizens in Manchuria, many worked for the Manchurian Railroad, were effectively abandoned by their own government, more or less left to their own devices in the chaotic time while poorly educated Soviet soldiers roamed in China and Korea (Soviets had unilaterally broke a treaty and advanced to Manchuria).  These Japanese left in China were called "Ki-min" 「棄民」or 'discarded people'.   A son of a pediatrician, my father was about 12 years old at the end of the war, unaware of the atrocities Japanese military had inflicted upon other Asian countries.  He said his playmates were Chinese and Koreans.  One day in 1945, when Emperor Hirohito made the radio announcement ending the war, his Korean friend said, "Hey, YOU guys lost, WE won!".  The 12yr old boy had no idea that there was a divide between 'we' nor 'they' with his friends, which left a strong impression on him.  Many of these returning, 'pulling back' people, or "Hiki-age" 「引き揚げ」Japanese children from China, were to become pillars of the Japanese post-war society, producing CEOs, professors, politicians and major artists: those include Seiji Ozawa (son of a dentist in Manchuria) and Hanae Mori (fashion designer).  When they returned to Japan, they had to start up from zero with nothing but the clothes on their backs, and even fight discrimination against these 'discarded' people; they had the chutzpah to climb back up in society.  In fact my father was one of more fortunate children since his father was a doctor; many poorer families had to leave a young child or two behind, who were left abandoned and adopted by Chinese families who took pity on them. (just imagine the humanity of these Chinese parents, who picked up and took in these children of their 'enemy')   These toddlers were raised by their adoptive Chinese parents, grew up and married as Chinese; they started to come back in the 1980s to Japan, in search for their original families.  They pleaded to their families to come look for them, talking on TV wearing Mao suits describing smallest of memories, scars on their bodies, clothing they were found with.  Many Japanese families were guilt-ridden for abandoning the children and remained silent, or they simply had already passed away.  It was quite tragic to watch, but I couldn't really look away since one of those people could have been my father.  (many did find each other and their tearful reunions were shown on TV. Some went back to China, some decided to come to Japan and restarted their lives)  In his lecture, he did discuss what he thought of the Emperor's responsibilities in WWII.  He questions why the Emperor didn't end the war sooner, before the atomic bombs were dropped and Tokyo was flattened.  He told how the young Japanese boys like himself those days were made to blindly follow and worship the Emperor, brainwashed and taught to live and die for him.  It was probably the same in Germany with "Hitler Jugend."  These stories are told and retold, but the young Japanese are getting increasingly oblivious of it; he said he decided to tell his first-hand experience again, for us to remember what war does to people's lives, and to preventing the history repeating itself.  So, I retold his stories here on my blog again.

The second talk of my father this day was about the environment, his solar house, vernacular houses around the world adapting to each climate and environment.  Towards the end, he talked about the future of energy including the Fukushima nuclear accident.  I understand there were my father's long-time associates and even childhood friends who became CEOs of gas or nuclear/electric companies in the audience.  Even the former Vice President of TEPCO was there, who is in fact, my father's classmate from his middle school.   I thought my father did the best he could, simply to show two options; whether to continue using nuclear energy, or to stop it.  He said there is no middle ground such as 'gradual decrease'.  He showed the environmental and economic consequences of both options and choices Japan had to make in either cases.  Then he went on to end the lectures by talking about his visions and thoughts for the future.

My father is a scientist, and as scientists usually are, he is rational; his reasoning is based on gathering scientific facts and data.  After retiring from teaching, he has been continuing to gather data from his solar house where he lives, constantly improving the heating/cooling systems and documenting his processes including the efficiency and cost-effectiveness. His thoughts are usually well organized and he speaks of 'cold hard' facts.   As he neared his retirement, he started to speak more about abstract things; his 'retirement lecture' held at Waseda University more than a decade ago, was attended by hundreds, as he was a celebrated professor there.  His thesis in that lecture was what 'happiness' means, and what he thinks and hopes the world will be in the future.  However it wasn't any kind of a 'poetic' or artistic prose or imagination, but rather a result deducted from the years of experiences and gathering knowledge as a scientist.

Towards the end of his second talk this Friday at his 80th birthday celebration, my father surprised me.  He said: "I predict COUNTRIES WILL DISAPPEAR in the future", the same thing John Cage said at Juilliard.   I have now heard an artist and a scientist, from two different points of view, coming to that same conclusion.

John Cage said, "Borders, Politics, and Money" will disappear.   As we know, borders are often disputed because of religion, and politics.  But is it really so... would it be possible that there are forces that be, directing people to disputing borders, using religion and politics?  And that of course, has to be the Money....  If we let money disappear, will there be no borders? Utopic?  Oh yes :)

My father's last words in the lecture was to suggesting people to THINK more, rather than to KNOW more.   Gathering knowledge is important, but he argued that we are now too busy gathering knowledge and barely have time to think.   In my opinion, that also goes to music creation and art in general.

By the way, as I mentioned my father's 80th birthday celebration was attended by many of his former students.  I knew many of them since I was little, and remember them as skiny, scruffy grad students.  They would come over for a home party every Xmas, and it seems I have treated them quite roughly, forcing them to play boardgames with me :)  I was probably 9-10 years old.  Now I organize home parties every Xmas, inviting friends and more importantly my students so they get to meet the professionals in the field in a relax setting.  I perhaps inherited that tradition from my parents.  It was quite impressive to see this Friday, that many of these former skinny grad students are now CEOs, professors and some even Presidents of universities.

In my previous post, I talked about being an expat and that started from coming back from Ottawa, Canada as a child.   An old friend of my father said to me at the party following the lecture, "I saw you when you just came back from Canada [I was about 6 or 7 years old].   You said to me, 'I don't know where I belong, I don't know which nationality I am!'".  I guess that never changed!!!

And just so this long post (thank you for those who read it :)   fits into my "Extended Violin Diary", I would mentioned that while I performed between my father's two lectures, I have inflicted some serious Subharmonics at the Japanese architects, playing a short version of my "Caprice for Subharmonics".  But that was only after I decided to be good and obeyed my mother's orders, and played "Thaïs meditation":)