As I mentioned yesterday, I decided to jot down what I'm doing preparing for my April 10th concert.

However, that is not the only thing I am doing--I usually have several kind of projects in parallel, but that is the same with any artist.   In my case, as a "performer/composer", I have tasks that belong to different compartments of my life.

Aside from my major two upcoming works; one as the performer/composer (Poly-Monologue) and as Michael Gatonska's interpreter premiering his new work, "Shin rin Yoku" (Forest bathing), the most immediate task I have is as a violinist for next week in Japan, recording Japanese composer Takayuki Rai's composition written for me entitled "Active Figurations" for Fontec Japan label.  I know this piece, I premiered in 2009 at Music from Japan Festival 2009 which I curated, but this week I have to really be good (no wrong notes LOL!) for the recording.  and I must keep my chops up to sound clean (scales, scales, believe or not! :)  I also have a few other creative projects (commissions actually) that's not even on the back burner, but kind of on a side burner.  More on that later.

Kyoko Kitamura and I actually did one experimental concert back in December, and I'm deriving my ideas a lot from that experience.   The picture above is from that concert, held at the Spectrum in downtown NYC.  I'm imagining her voice follows herself, lingering thoughts, but not just a simple delay... then I imagine what harmony, what pitches she should choose, or let her choose... etc. etc.  then which MaxMSP objects I should use, then how I should construct the patch.  I'm sending her some Max patches that she needs to calibrate for her own voice, which she can only do, and she doesn't need me beside her (IF my Max patch is clean, and it is NOT so when I make patches for myself - Max users know what I mean :)

For Michael Gatonska, I have his score, his visuals and his electronic sounds that we are going to combine together.  Guessing from his score, he has very clear ideas to what the electronics and the general sound world he has in mind, which is helpful as I act as his programmer as well.   The electronics are going to be in two layers: one which provides the background, another is the interactive processing I will do using various methods including "Augmented Violin", my bowing motion sensor from IRCAM.  He is coming over on Friday, so I'm trying to organize myself and my thoughts about all this, which is like a puzzle.  I love puzzles, my father loved puzzles and I did marry someone who loves puzzles :) 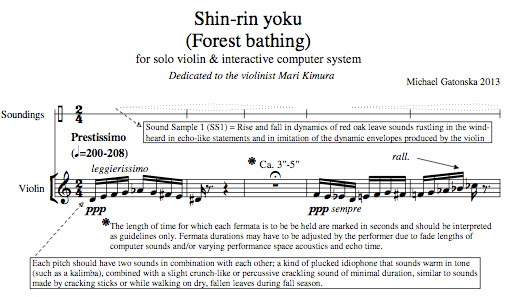 Going back to the 'multitasking' I need to order some maroon-colored sweatpants for my daughter... like that's the major priority!! :)
Posted by Unknown at 7:01 AM