Rain to Slush to Snow Storm in Manhattan

And composer Michael Gatonska is braving the Metro North railroad in this weather condition!  It remains to be seen if he makes it here! It has been a looooong winter here in the USA East Coast, but compared to the midwest, I'm sure this is completely wimpy!   Last week in Orange County while visiting U.C. Irvine, a nice hotel clerk said, "Oh you are from New York, New York!  How's the weather out there?"  It was in the high 50s (20Cs) in Southern California.  So Not Fair :)

Yesterday I gave a quick introduction of MaxMSP to a young Juilliard student who is starting out.  Instead of talking about the Tutorial first, I first showed him my recent work with Max for LIVE, and how I interact with my bowing motion sensor from IRCAM, "Augmented Violin".  I also showed him my interactive audio/visual works.  I find it more useful for those who is starting out, to see what can be done with these tools which may help them imagining something new of their own.  I will never forget when I first heard Mario Davidovky's Synchronisms NO. 6 for piano, that first 'G" on the piano which gets taken over by a soft electronic sound of the same pitch.  That piece got me into all this eventually, and I ended up studying with him.  Davidovsky was in fact, creating the interactive electronics without today's technology, creating an auditory illusion using a fixed media, recorded tape. 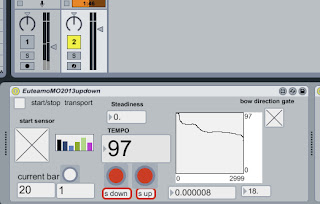 At the Symposium at UC Irvine last week, jazz pianist/composer Vijay Iyer asked me if I have published this demo how to "flow follow" instead of 'score follow' I first started in 2010, controlling 'agogig' using the bowing expression.  I have made more improvements, especially after my collaborator formally at IRCAM, Nicolas Rasamimanana who now runs a company named Phonotonic, and I made progress in detecting bow direction last year (up and down bows).   This is a demo which I also showed my student today.  I haven't really published it except in passing, and I probably should.  What I really should do before the summer is to somehow make this more configurable, usable in many different musical context, or at least make it easier for people to calibrate.  I spend so much obsessive time redrawing this graph (the little graph on the bottom right, a black line that goes from top left somewhat down), which is the tempo-to-movement ratio :)

Other than that I am preparing for my recording next week in Japan, polishing myself (that is, I need to get my sounds and intonation clean :)  I foresee the long plane ride, seeing my family etc. so I'd better be prepared before I get there!

Aside from this, I made a major upgrade of my system, namely 'pitch shifting' system.  And it's Kyoko who forced my hands, as she is using the very latest of Max version, unlike me.  I'm usually trailing WAY behind everyone on any version upgrades, for the fear that there maybe 'bugs' in new versions.   I have been using (gasp!) the same 'pitch shifting' mechanisms since the 1990s!!  but finally things have caught up with me.  The new version of MaxMSP made my old mold impossible to continue working, so finally I was able to find a way to upgrade my core pitch shifting system which I have been dreading to do so.  But necessity is the mother of invention, or upgrade, correct? :)
Posted by Unknown at 6:50 AM