As I imagined from the very first time I heard Michael Gatonska's work at Music with a View festival organized by formidable pianist Kathy Supové, Michael is one of those composers whose sound world is so crystal clear in his mind, that I could feel the sound is right in front of him; the only obstacle between him and the outside world is people like me to interpret it.     I am working on creating processing for the violin that I try to get closer to his aural vision.  Michael is also a painter as well as a composer, so his descriptions are very visual and very helpful for me, who is his interpreter as well as his programmer. This is his hand-written score, or the scheme of "Shin rin Yoku" (Forest bathing), which will be premiered at the Roulette on April 10th.  This score looks like an art in itself! 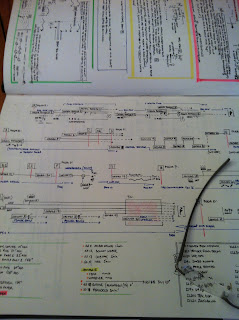 Braving the snow storm in Manhattan, Michael arrived in excellent spirits.  We worked together throughout the morning into the afternoon, punctuated by Indian food and Chianti (which I opened without telling my husband... hope it was ok... :)

We went over his score which consists of three layers basically; my violin part, the background sound-world (sound of nature), and the real time processing of the violin.  We spent most of the time figuring out what kind of processing  he had in mind and how I can get close to it by trying out different signal processing.  He was very patient as I was programming on the fly.  For me, it was SUCH A TREAT, learning about hearing music and sound from a different set of ears; this is why I still remain an interpreter playing other composers' pieces.  I don't want to become someone who only performs my own compositions, which tends to happen to many 'performer/composers'.  I so treasure the experience of getting inside others' head-space, and I learn SO MUCH from the experience.    With Michael, it was almost like a coaching or a lesson, learning the sound world I didn't know.  Above is the video of us tweaking a section where he wanted me to compete with a woodpecker sound :)

Michael's descriptions on the score are very colorful and vividly visual, but in person as well.  "Can you make it with more of those Japanese barbecue TWANG?", or "You know that William Schatner singing 'You're gonna die', that 'Funeral-parlor organ' sounds"  (??!!)  We actually listened to the Schatner song together :)

After my kids came home from school, we even worked some more while my two children had an epic fight, yelling, screaming, banging doors and crying.  Michael was so gracious and pretended it didn't faze him at all, but I'm totally embarrassed!  Now that he is gone, my kids stopped fighting, quietly reading and doing their homework.  Oh why oh why?  Actually I know, most likely they just wanted my attention...

Now I'm back to creating some patches for Kyoko Kitamura, for our "Poly-Monologue".  Oh and I'd better pack, I'm leaving to Tokyo tomorrow  :)